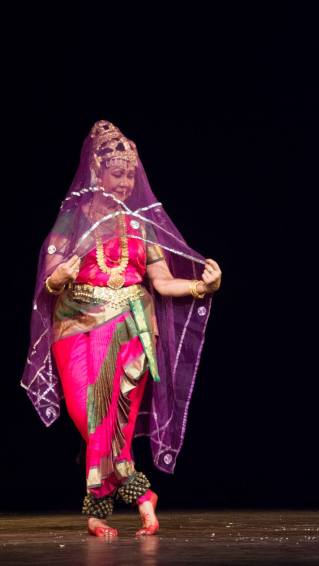 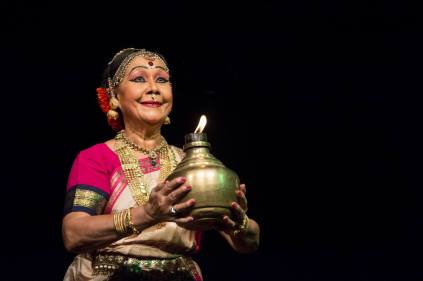 Guru Usha Datar, is Bengaluru-based veteran exponent of myriad styles of classical forms right from Bharatanatyam to Mohiniattam to Kuchipudi and Kathakali, She will be performing Temple dance. Temple dance is the tradition followed by the Devadasis of South India. The Devadasi tradition, which is now almost extinct, upheld the dance form which was a divine dedication to the main deity of the temple. This dance is usually performed at the Godhuli Lagna which is around 5.30 in the evening. The temple doors open with the auspicious sound of the Nagaswaram and the conch. A grand procession led by the Devadasi adorning an auspicious white or off-white sari/costume arrives along with her Dance Guru, a group of musicians playing various musical instruments and other dancers who help her in performing her rituals. This divine form of Temple dance has been very well documented in Chamarasa’s ‘Prabhuleela’ in which he depicts the Temple dance performed by a Devadasi named Mayadevi. Traditionally, the temple dance has three parts to it. They are the Shodashopachara Pooja Krama, Kelika Bhaga and the Bhagavatha Mela.

The first part of the entire tradition, Shodashopachara Pooja Krama begins with the Ranga Bhoga which is the rituals performed on stage to the chants of the temple priests. Before the Devadasi enters the temple, she is invited by the temple authorities with a thamboola, which is an auspicious sign. The Devadasi performs the Katte puje which is an offering made to the place where the divine pipal tree is planted along with the Naga Vigraha in the temple premises. After this, the Devadasi begins the Ranga Bhoga by stepping onto the stage to the music of various traditional instruments like the Bheri, Nagari, Kombu and Kahale to mark the beginning of the Devadasi Nrithya. On entering the Ranga mandira or the stage, the Devadasi offers salutations through dance to the nine directions to invoke the blessings of the ruling Lords of the nine directions. Each salutation is performed in a Raaga and Thala that is most desired by the ruling Lord of that particular direction. With this, follow the other rituals such as the Kumbha Prathistapana, Kumbhaarathi and Choornika. Once done, the Devadasi performs the Vinayaka Kousthubam, invigorating Lord Ganesh, the destroyer of all obstacles, followed by Addi Chaari, the Nritta piece of the rituals. With this, the first part of the rituals, Shodashopachara Pooja Krama, also called the Poorva Ranga or Navasandhi comes to an end.

The second part of the tradition is called Kelika. Bhaga comprising of Shiva Kaivara, Devi Kaivara, Vishnu Kaivara and Adhyatma Ramayana. This part portrays the stories of different Gods, invoking the Bhakti rasa and gives no room for Shringara rasa.